The great outdoors have gotten a little more comfortable, thanks to unique and cozy retreats created by Cabinscape.

Owned and operated by John and Laura Loerchner, Cabinscape provides people looking to escape from the hustle and bustle of daily life with clean, solar-powered and ecologically responsible getaways where they can connect with nature while still enjoying some creature comforts.

“We offer tiny, off-grid cabins for wilderness retreats,” John explains. “The idea is essentially a sort of base camp that you can use in order to get outdoors.”

“We’re very focused around the idea of people getting outside and going paddling, biking or whatever your preferred activity is, and just providing that sort of safety net or a little bit of added comfort.”

John and Laura are avid outdoor enthusiasts, but their wilderness excursions were getting a little less comfortable when they started their family. It was then that the idea of Cabinscape came into being.

It was developed, “in order to make things easier because you are either new to the outdoors, or like with our story, you had a kid or two and backcountry camping got a little bit hard,” says John.

The couple built their first cabin in July 2017 and noticed a very quick and steady response. “The first year was kind of experimental, just dipping our toes in it to see how it would go,” says John. “It went well. So that is when we decided to really start focussing on it as a full-time occupation. It’s really been the past two years that we’ve been working to expand and establish ourselves.”

Cabinscape now offers nine cabins scattered throughout remote areas in southern Ontario, but that is not where the story ends. The couple is ramping up to offer even more retreats as interest in the product soars.

“COVID, obviously, slowed things down for us a bit but we’ve got three more micro cabins, or slightly smaller designs even, opening in Halliburton in the next couple of weeks,” John notes. Cabinscape is currently working with officials in the to build five camp cabins at its newest initiative – a wellness and adventure retreat called Cabinscape Camp – and up to 10 micro-cabins.

John reports, “If all goes as planned, by next June we’ll be somewhere between 20 and 30 micro-cabins, so we are more than doubling by next spring.”

Such growth is a pleasant surprise for the adventurous couple, although it “was a hope,” says John. “When we built our first cabin, we really just wanted to see what would happen. We always knew that this is where we wanted to go, but you never know if the pieces are going to come together for you.”

At first blush, it seemed as though Cabinscape was not even going to get off the ground. Finding financing was difficult, but financial institutions steered the couple towards Community Futures Huron.

Says John, “I looked at a lot of banks and they were not really interested in this kind of venture, at this stage. As they say, ‘friends, fools and family’ and I went in those directions but did not really have a lot of luck. Then somebody directed met to Community Futures in Huron and they were very supportive. I managed to get our first loan from them.”

“Setting precedent has been a big part of it. You are kind of spinning your wheels at first and then you get a little bit of traction and then you can really start going. So, we’ve been working towards this for a while.”

When John and Laura were interested in developing Cabinscape retreats throughout Kawartha Lakes, they were able to find support, advice, and financing from the Community Futures Development Corporation offices. The resources and contacts afforded to them by the offices was invaluable.

Had it not been for the first loan from Community Futures Huron, the couple would not have seen their business grow as quickly. “It was definitely a huge catalyst,” says John. “It would have been a much longer slug then what we’ve experienced now. We would have had to keep pounding the pavement for private investors, but that would mean sacrificing a lot more parts of your business or other things that you don’t really want to give up at this stage of the game.”

John and Laura had not heard about Community Futures before starting their business.

“Some of the economic development people from some of the different municipalities were pointing me in their direction and I know it’s really popular with a lot of small business start-ups,” he says.

“In our case Laura and I were looking for something similar (to Cabinscape) and you could either have a car camp at an Ontario park or you could rent a cottage for a week and there was just nothing in-between, there was no other way to get the wilderness experience.”

“In the classic entrepreneurial style, we identified a problem, and we were able to solve it. It’s definitely working out for us,” he laughs.

With loans from Community Futures and SOFII, Cabinscape can hire an additional 20 workers over the next three years.

“A lot of our staff consists of cleaners and maintenance workers at all the different locations so it’s difficult to have full time wages, but we’ve been able to add four or five full time equivalent positions just this summer,” John notes.

Although, like many businesses, Cabinscape was forced to shut down at the height of COVID-19, it appears the worldwide pandemic has brought on even more interest as people look to find new ways to escape.

COVID has meant new ways of doing business and at Cabinscape, additional cleaning measures have been implemented, so rather than book one-night excursions when cabins are vacant between rentals, cleaning staff can do thorough sanitization of the cabins in that off-time. Beddings have been removed to further eliminate potential COVID spread.

COVID has also meant longer wait times for John and Laura to get the go-ahead from municipalities. “People couldn’t come to the site or factory to do inspections, so just getting things done is so much harder. Probably with financing as well, everything just slowed down.” And because the cabins are in more remote areas, backwoods trekkers are asked to stay out of surrounding villages to shop and instead, ensure they bring essential supplies with them.

“We’re asking people not to interact with locals as much, that’s an unfortunate side product of COVID,” says John.

“A big part of what we trying to do is create that general awareness of the wild spaces that Ontario has to offer,” he adds. “We really, sincerely believe that by getting more people out in the wilderness, that’s our own form of activism, of creating support. The more people that we get that fall in love with the outdoors, the more people that are vocal around supporting it.”

If you’d like more info or to book your stay at one of Cabinscape’s off-grid tiny cabin rentals in the woods, email bookings@cabinscape.com.

This client success story, written by Colleen Toms, is one of a series of articles featuring the success stories of a wide variety of Western Ontario Community Futures Development Corporation Association (WOCFDCA) clients.

END_OF_DOCUMENT_TOKEN_TO_BE_REPLACED

The Huron Manufacturing Association (HMA) is a strong voice for manufacturing through the promotion of education, networking, celebrating the achievements of our membership.  Recently, the HMA...

END_OF_DOCUMENT_TOKEN_TO_BE_REPLACED 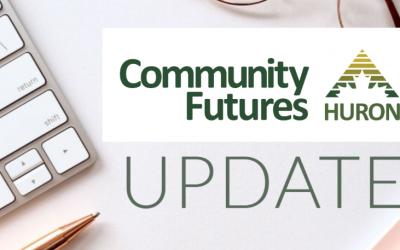 Ontario Small Business Support Grant Starting at $10,000 for all eligible businesses, the grant provides businesses with funding to a maximum of $20,000 to help cover decreased revenue expected as a...

END_OF_DOCUMENT_TOKEN_TO_BE_REPLACED 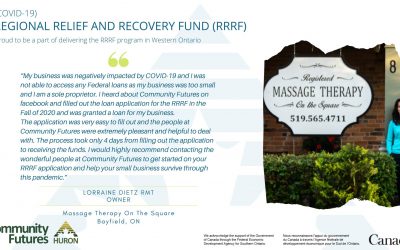 Massage Therapy on The Square client safety ensured with the RRRF

Does your small business need help to weather the changes and challenges brought about by the COVID-19 pandemic? The Regional Relief and Recovery Fund, an interest-free loan program offered through...

END_OF_DOCUMENT_TOKEN_TO_BE_REPLACED 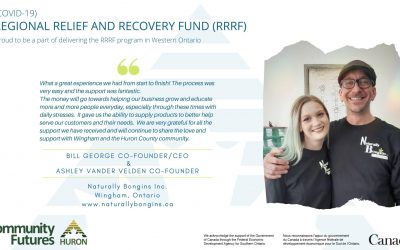 Naturally Bongins plans for the future with RRRF help

Small businesses are at the heart of our economy and are vital to our communities; the Regional Relief and Recovery Fund, offered through Community Futures Huron, is in place to help Huron County...

END_OF_DOCUMENT_TOKEN_TO_BE_REPLACED

The Huron Manufacturing Association (HMA) is a strong voice for manufacturing through the promotion of education, networking, celebrating the achievements of our membership.  Recently, the HMA...

END_OF_DOCUMENT_TOKEN_TO_BE_REPLACED

Ontario Small Business Support Grant Starting at $10,000 for all eligible businesses, the grant provides businesses with funding to a maximum of $20,000 to help cover decreased revenue expected as a...

END_OF_DOCUMENT_TOKEN_TO_BE_REPLACED

Massage Therapy on The Square client safety ensured with the RRRF

Does your small business need help to weather the changes and challenges brought about by the COVID-19 pandemic? The Regional Relief and Recovery Fund, an interest-free loan program offered through...

END_OF_DOCUMENT_TOKEN_TO_BE_REPLACED

Naturally Bongins plans for the future with RRRF help

Small businesses are at the heart of our economy and are vital to our communities; the Regional Relief and Recovery Fund, offered through Community Futures Huron, is in place to help Huron County...